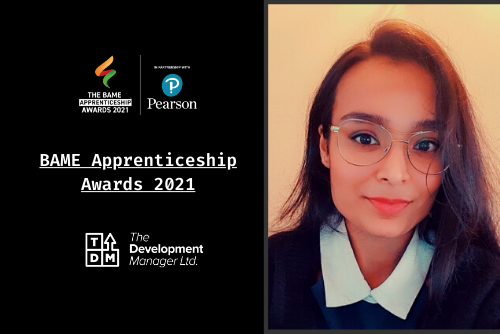 The BAME Apprenticeship Awards 2021 Apprentice Finalists have been released and we are proud to announce that Manisha Kaur from Infor UK has been shortlisted in the Digital & Technology category.

The award’s received a record number of nominations with more than 300 apprentices nominated nationally across a wide range of categories, Manisha of Infor UK, has done extremely well to have fought off some very tough competition to become a Finalist.

The awards platform has been instrumental in creating future leaders and ambassadors for Apprenticeships and brought to the forefront key issues surrounding the need for more diversity within particular sectors.

Winning employers have showcased their diversity and inclusion strategies and how it’s helped them to shape an inclusive and diverse work environment as best practice examples for other organisations to follow suit.

“While this year hasn’t been easy for anyone, we have seen true resilience from apprentices who have had to deal with an unprecedented scenario. Covid 19 is a historic moment and I thought nominations would be low, however the overwhelming response we have received this year has been humbling to say the least.” says Kasim Choudhry director of BAME Apprentice Network

We caught up with Manisha to get her reaction from the shortlist announcement:

“I am grateful to have been able to study through both the traditional University route where I gained a Chemical Engineering Degree and now being half way through this incredible degree apprenticeship for a Digital Solutions and Technology Degree, I can honestly say that both have been fantastic!”

“The skills, experience, and knowledge gained from the apprenticeship have now become a part of me and my education.”

“It is motivating to be from an ethnic minority and a woman working in the STEM industry.”

⁠”I ran a campaign a while ago for my Miss Birmingham Charity Project with the aim to raise aspirations in young people and with this nomination today, I really hope that this inspires young people to dream big, learn and grow, educate and be educated and to live their lives to their fullest potential! Make a positive difference to our world, starting with yourself!⁠”